The other day, I was discussing with a young person about what they believed to be hallucinations. They described them as small black nondescript figures that wandered around their vision, with various strange black and fuzzy spots appearing through their vision. Strange white spots would come and go and flitted about his vision. These small spots and pieces appeared to be moving in ways that could be frightening or disorienting. To them, it was undoubtedly that they were “going crazy” and were experiencing the early symptoms of psychosis - but to the trained listener, it was obvious that visual perception and neurological issues were much more likely responsible. While visual snow, a relatively harmless condition, was apparent, some symptoms appeared to point towards the early signs of a condition that could lead to possible vision loss. Along with being made aware of a clinical possible cause - a tick bite from a few weeks ago - the possibility of a potentially serious tick borne illness became apparent.

Indeed, these visual phenomenon were otherwise completely unknown without extensive questioning of the nature of these hallucinations.

Many people do not realize that vision is not a static accumulation of light and shapes, but rather a composite, complex neurological process that is unique for every individual, shaped largely by socio-biological forces. For example, we may see what appears to be a helpless bird on the ground, which turns out to be nothing but a dead leaf. Or, we may believe we see a venomous snake in the trees when its merely a twisted rope. These mistakes of perception are exploited actively in the animal kingdom for defense - many species employ careful camouflage to disturb the process - using spots and wavy lines to break up outlines, and colors to blend in with surroundings - or use eyespots to intimidate potential predators with the face of an even larger one. Among people, many optical illusions were discovered and later mass produced, reproducing these strange “hallucinations” to millions of people trivially over the internet and print media. These hallucinations take advantage of the fact that visual processing in humans and other animals is constructed based off a series of social expectations that can be fooled.

To construct an environment that can be virtually navigated, we experience a sequence of procedures that constructs our perception from visual input, later combining it with other sensory data, memories and language to produce what we experience as reality. Among some of the earliest structures to form after viewing something are those surrounding basic depth perception, corners, curves, and basic forms. These lower-level constructs can be then assembled and identified as abstractions with previously reinforced social structures. These objects then compose the interpretation of the world that we experience - the reason why one can perceive a leaf as a bird is because the memory and cultural context that produces the abstract spatial object of a “bird” uses an established template diagram that unites the sensory data like a line of best fit. Perception is then a matter of statistics, what is most likely to be there - and transcribes the most probable observation into spatial structure through mental patterning mechanisms.

As one can see, this process does not define clearly where the eye meets the brain, as no such distinction really exists. Instead, an indeterminate series of languages, transmitting signals from photons that hit the cornea to the perception of subjective experience in the thalamus, form around repeated observations and adaptations to predict future observations. We know what a “bird” is because we’ve been told what birds are and what they can be, informed which objects are “birds”, repeatedly observed “birds”, allowing them to exist in an abstract structural model, granting the ability to identify all kinds of “birds” previously unseen. Birds are so abstract as a concept that we can represent birds that we’ve never seen before on flat surfaces in images and art, and reliably unfold these references to identify birds in the field, as seen with field guides. As we observe the object, we compare it unconsciously to this mechanism of “bird” we reinforced in our heads - we observe that the strange object appears to have the colors of a bird, the shape of a bird, the beak of a bird - until we approach it closer, gain more information, and realize that it is simply a leaf. This very process is what allows the true birds to continue to exist beyond our perception. 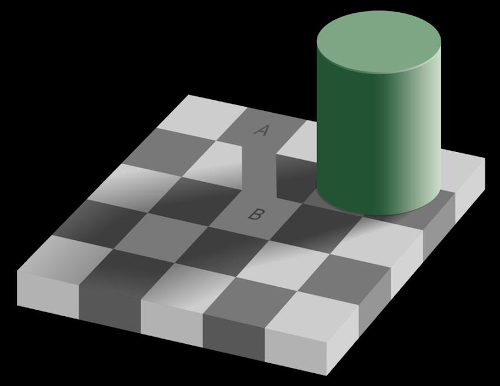 This process can receive interference at any point along its sequence to create a new assembly of parts. Elements can be arranged in a specific manner, as seen in optical illusions, to exploit the expected visual machinery of people and produce incorrect observations. In the example illusion above, two squares, A and B, have the same color - but the contextual clue of the shadow causes B to appear lighter than A. The higher level abstraction of shadows and depth perception are mislead by this intentional low-level difference, creating in most observers the incorrect assumption. Physiological failures can lead to similar mistaken perception - the eyes could be inflamed, blocked or damaged, leading to strange visual phenomenon. Rapid retinal detachment produces strange floaters, light spots and peripheral blindness and that can lead to permanent vision loss if not treated immediately. Migraines and seizures can cause aura and strange visual movements. Trauma, memories and severe mental illness can construct visual phenomenon through pattern recognition in random visual noise caused by other visual processing issues. All layers of these perception computations interact with each other in ways that can rearrange the structural elements of this perceptive process into a series of procedurally evolving abstract machines. Indeed, it is well known that blind people process language and objects differently than sighted people, undoubtedly a consequence of the unique arrangement of their senses. The body adapts readily over time to changes to our ability to perceive, to reliably organize information to reproduce and predict social structures and expectations - thus changing our process of perception more and more over time.

The persistent hallucinations observed by the mentally ill and neurologically disabled then is a reinforced system of repeated patterns and signals that diverge from cultural expectations. Through the development of years and years of invisible machinic microscopic adaptations to various external and internal pressures, the visual apparatus is desynchronized from the external world. Social reinforcement of hallucinations being socially interpreted as clearly a sign of madness and not a procedural divergence of expectation accelerates the alienation of this process. Leaving the patient unaware of any other possibility, the countdown begins to engage a social procedure of complete and desolate isolation, a fate only barely suppressed by a highly profitable industry of mass prescribed dementia-inducing anti-psychotics, all while other potentially preventable pre-existing conditions are unidentified and ignored along with the insane person. In the era on the verge of mass media manipulation, healthcare gouging and social mental health collapse, more than ever is it necessary that the average person is informed and educated on the basics of perception, visual language and the production of hallucinations and other perception malfunctions.

The good news to our story is that this person will be soon be seen by a doctor and hopefully can have the condition treated before more serious symptoms arise. However, the very real possibility of these symptoms being missed and real eye damage occurring feels too close for comfort. Worse still is the possibility that these physical disturbances that could lead to permanent vision loss are not only observed as psychosis, but become an active component in the development of future actualized psychosis. The fear of being “crazy” sets up the conditions for actually becoming it - and more than anything, a major defense is understanding the basics of perception. Furthermore, psychosis acts as a structural barrier to access to proper treatment due to branding potential vision loss as hallucinations - which can accelerate this process even further. Clinical psychiatry in practice should be not only more aware of the impact of abnormal sensory conditions as those seen in disease or disability, but also how awareness of perception and sensory processing can assist greatly in stabilizing the progression of severe mental illness. Thus, in my opinion, any case that hallucinations are reported - of both visual and other sensory origin - thorough sensory and neurological testing should be undertaken, and the possibility of invisible sensory difference should never be eliminated. Hallucinations should be treated as sensory processing issues. Simply put, even psychotic hallucinations cannot be simply considered “psychological” and do emerge from physiological experience which may indicate real sensory differences, which may even be a major contributor to the psychotic presentation.

Knowledge is power, and a patient cannot be expected to truly get better if they are left so much in the dark.